The Harry Potter fandom is a far more popular and wide-spread beast than the Newsies fandom, but no less significant to me. There is nothing that I could say about the series that has not already been said or felt by another fan. Like so many others, I feel a personal connection to the series and there is no describing the feelings that burst inside of me every time I watch or read Harry Potter, experience anything Harry Potter related, or find out new bits of magic from the author, a personal hero of mine, J.K. Rowling.

In 2015, I finally realized my dream of visiting Diagon Alley and Hogsmeade Village at Universal Studios Orlando. I honestly didn’t think that this was something that I would have the opportunity to experience, but the stars aligned and another dream came true this year. Kristen (pictured above; I mentioned her in my previous blog as someone I met via Newsies) had relocated with her family to Florida, which gave me ample enough reason to figure out a way to travel there. I had enough Delta Skymiles to catch a flight for the massive amount of $11.20.  And for SEVEN DAYS–SEVEN–I practically lived in Diagon Alley. 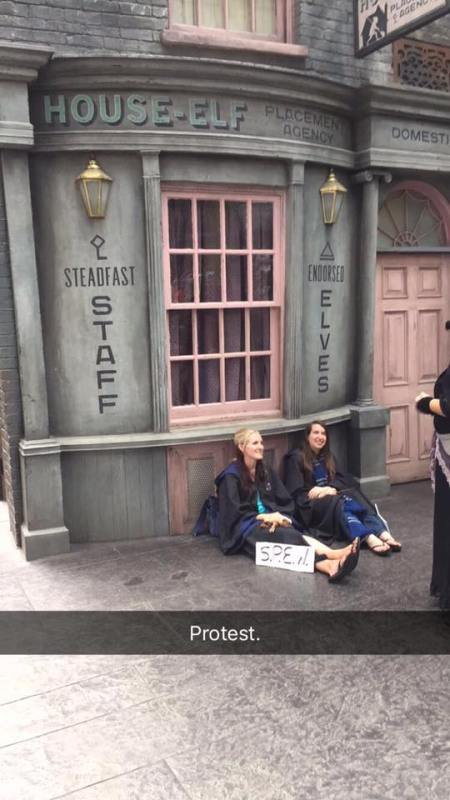 It was due to my discovery and subsequent obsession with Harry Potter that I stumbled upon a message board called the HPRPG. When I first joined this group of young fanatical writers, I was a moderate to okay writer at the age of thirteen. And that is being a bit generous to myself. The writers I met on this message board taught me how to write. They critiqued and tutored me in creative writing on a plane that my actual teachers could never have even dreamed possible. They challenged me and they pushed me to do and be better, to step outside of my comfort zone with my writing, and to in turn help guide and teach those that came after me.

I learned from the HPRPG that writing can be much like acting. One must truly know one’s character inside and out in order to write them. One must study their character, learn what their character knows, be an expert in everything. I learned how to discover depth in my characters, to put them through trials to develop them, to let them lose sometimes, to let them hurt, to win, to fail, to love, to hate. I learned how to take someone else’s character and grow them beyond the pages of the books. I was forced to write Draco Malfoy in his life after the series had ended. I was challenged to take minor characters from the background and make them three dimensional. I was encouraged to develop original characters and make them just as well-known and eagerly followed as book characters.

I went on to live with one of the girls I met on the HPRPG. I remain in contact with many writers from the HPRPG, all of whom have flourished in life and are beautiful, successful, lovely human beings. I find myself so ridiculously blessed to have been given the opportunity to connect with these people, and I know for a fact that I wouldn’t be half the writer I am without them. The HPRPG lived for over ten years, and while it has now disbanded due to us all growing up and seeking real life adventures, it will always remain a huge part of who I am and how I write.

Experiencing Diagon Alley and Hogsmeade Village this year was truly magical. I had written so much about these places, going beyond even what Rowling had provided for my imagination, and then I was standing there. Really there. I couldn’t help but wonder how Rowling must feel when she stands there in the midst of something she conjured up in her own imagination. As a writer, I feel that there can’t be words for that. My dream is to one day experience what it is to see something I’ve imagined come to life outside of the pages of books.